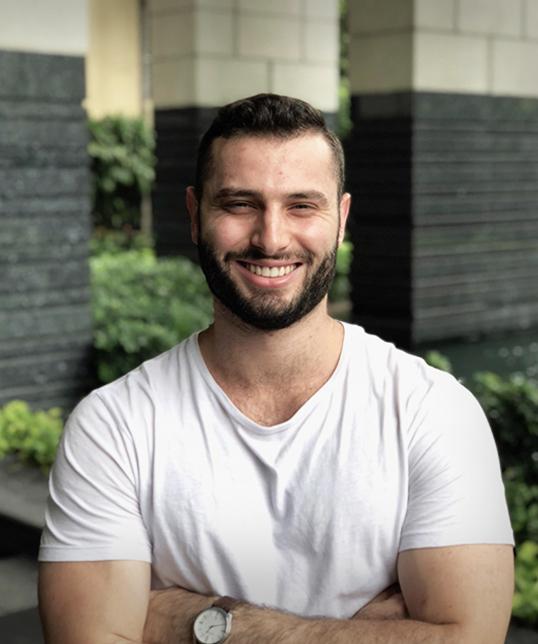 Anton Lucanus is famous online for his Instagram account @ojekbule. But in addition to his funny and crazy posts, Anton holds a BSc from the University of Western Australia and is the Founder of Neliti, Indonesia’s largest digital library with over 200,000 publications and 3 million monthly website visitors.

Check out my interview with Anton below. Who knew that Anton is quite a serious guy with dreams of improving Indonesia’s science industry!

Indonesia chose me – not the other way around!

Tell me about your current role and how you got there.

Besides Ojek Bule, I work as the Founder & CEO of Neliti. Neliti is a SaaS [software as a service] company that helps universities and research institutions create their own open access repositories, online journals and conference proceedings.

Neliti began back in 2015. At the time, I was interning at the Eijkman Institute for Molecular Biology in Jakarta under an Endeavour Awards Scholarship. During the internship, I learnt how Eijkman had an enormity of impactful data that was currently unavailable publicly, like Japanese Encephalitis rates in West Java and the genetic sequencing results of Indonesia’s first ever case of Zika Virus. I built the first version of neliti.com as a way to deposit this data publicly, should it ever be needed by local or international health authorities. Beginning as a small repository for my laboratory only, Neliti has since expanded almost entirely organically to include 800 more institutions and receive millions of monthly website visitors.

The Australia-Indonesia relationship is important to me because there is so much potential for both countries to help each other economically and strategically. The more Australia invests in Indonesia, the more Indonesia’s economy grows. When Indonesia’s economy grows, more Indonesian people are brought from subsistence into the consuming class, which increases demand for Australian products and services. I’m really hoping that both countries take significant measures to facilitate foreign investment in Indonesia – I am one of many aspiring Australian entrepreneurs who would benefit.

How is the Australia-Indonesia relationship made all the more memorable with @ojekbule?

The idea for Ojek Bule actually began at an AIYA networking event in Jakarta in 2017. At the event, I met Adin, a very talented Indonesian videographer who studied in Australia. We thought it would be funny to dress me up as a GO-JEK driver, and we knew Indonesians would find it hilarious too. Coincidentally, GO-JEK was running a video competition at the time, so we recorded a video of the whole thing (find it on YouTube here).

The video never actually went viral. However, while we were recording it, someone on the street snapped a photo of me wearing the GO-JEK outfit and their photo got reposted by a lot of popular Instagram accounts and almost every major news website. That photo is what went viral. It was definitely the most crazy, stressful week of my life – I received over 2,000 messages within 48 hours and was getting thrown interview and sponsorship offers from everyone. Indonesian immigration even raided the GO-JEK office because they thought I was working as a real GO-JEK driver and GO-JEK reached out to me for a private meeting to sort out the mess that it created.

Why did you participate in CAUSINDY, and what did you gain from from the conference?

My main motivation would be CAUSINDY’s amazing network. I was quite surprised by the extremely high calibre of CAUSINDY participants and alumni – I’ve learnt so much from them all. I’ve also made many awesome friends from CAUSINDY 2017 and we still catch up often. One member even introduced me to a new customer.

Do you have any creative ideas for the Australia-Indonesia relationship?

Research linkages need to be improved between Australia and Indonesia, especially in the biomedical sciences. Indonesia’s a hotpot for amazing data and research on tropical diseases, but it’s largely untapped by Australian scientists. Australia and Indonesia are also very close geographically, meaning any emerging infectious diseases in Indonesia can spread very easily to Australia. Unfortunately, the large majority of Australia’s scientific talent only look to USA, Europe, Singapore or Japan when looking for experience abroad. In fact, unfortunately I was the first and only Australian to intern at the Eijkman Institute for Molecular Biology, which is Indonesia’s only Nobel Prize-winning institution.

I’d love to see organisations like ACICIS and International Internships build partnerships with Indonesia’s top research laboratories and offer something enticing for Aussie biomedical students. Perhaps an internship and cultural immersion programme that trains their research skills, helps them get published in international journals, and inspires them to focus future research on Indonesia.

Where do you see yourself in the next 5-10 years?

My goal right now is to revolutionize Indonesia’s library and academic publishing sectors with Neliti. I love my job and expect to work on it for the next 10 years and beyond. More specifically, we want to create repositories (digital libraries) for every one of Indonesia’s 5,000+ universities and research institutions and make over 90% of Indonesian research publications freely available online. Currently only about 4% of universities have repositories and less than 10% of publications are available online – so the impact would be enormous. I’d also love to see an Indonesian software like Neliti being used in universities abroad – that would be cool.

Do not be discouraged to keep applying – you will eventually break in!

Any final thoughts about CAUSINDY?

I am very impressed with CAUSINDY as a conference and ongoing community. The CAUSINDY community events are particularly awesome because they allow you to meet people who did not join the conference but still share the same passion for Australia and Indonesia.

My final words of advice are for those who applied for CAUSINDY but failed, please do not be discouraged to apply again. Please keep on applying. You will eventually break in and the experience is definitely worth it!